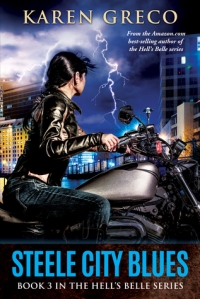 Blood Ops leader Dr. O is chained in the bowels of Steele City, the state’s maximum security prison, and the clock is ticking for Nina and Frankie to bust him out.

Now that supernatural creatures are out of the closet, Providence is descending into an apocalyptic wasteland. With the abrupt shut down Blood Ops, Nina and Frankie are forced to rely on questionable allies to battle Leila, a powerful witch/vampire hybrid hell bent on creating an indestructible supernatural army. She also happens to be Nina’s mom.

Alliances are tested and relationships fractured as Nina and her band of supernatural crime fighting misfits are pushed to the breaking point.

Steele City Blues, the third book in the Hell’s Belle urban fantasy series, is high-octane, action-packed, cinematic story by Karen Greco that fans of The Hollows and the Cassandra Palmer series will love. Join the adventure!

Nina and Frankie have their hands full trying to Dr.O from Steele City prison without the sudden appearance from Nina’s grandfather. They make a failed attempt at breaking into Steele City and instead of breaking Dr. O out they find out some horrifying things that are going on behind the prisons door. Not only do they have a monumental task of getting back into the prison to free those in there but they also have a deadline that will impact everyone.

This series gets better with each book! While I love Nina and Frankie I really enjoyed Casper more this time around. He’s sassy, powerful and just a funny guy to have around. The interaction of the characters is deeper and there are way more secrets that unfolded as well.

I love this series and hope that there are more books to come but the way it ended leaves me thinking it is the end but who knows. This is not a stand alone book, you have to have read the first two books to understand what is going on in this one.

ARC provided by Netgalley in exchange for a fair and honest review.

One thought on “Steele City Blues by Karen Greco”

Happiness is a Book

Happiness is a Book